'Wifredo Lam' at the Museum of Latin American Art 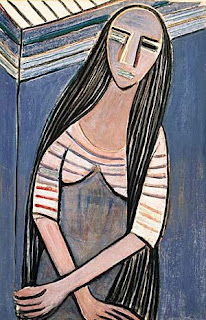 Wifredo Lam's delirious fusion paintings explore spiritual issues.
By Christopher Knight, Times Art Critic July 23, 2008
IN 19th CENTURY EUROPE, when modern science bumped aside the Christian God as the primary artistic foundation for meaning and moral value, artists lost a subject that had preoccupied them for hundreds of years. "Show me an angel and I'll paint one," the famously combative showman Gustave Courbet told his detractors.
A search for truth trumped its declaration in the depiction of religious narrative.But even though religion largely disappeared from art, spiritual interests did not. Not by a long shot. Those interests instead became a prime engine, especially for abstract art. Wifredo Lam (1902-82), whose work is the focus of a handsome and long overdue survey at the Museum of Latin American Art in Long Beach, is typically acknowledged for his painterly fusion of Cubism's multiple viewpoints with Surrealism's embrace of the irrational.

But that formal synthesis was undertaken for decidedly spiritual purposes. Lam was Creole -- Afro-Spanish on his mother's side, Cantonese on his father's -- and that hybrid identity is reflected in his art.Lam is one of those second-tier Modern artists -- there are a lot of them -- whose work rarely fails to impress when it is encountered but isn't encountered nearly often enough. Out of sight, out of mind, his paintings have become perpetual surprises.
Read the rest of the story here.
Posted by JHM at 5:38 PM