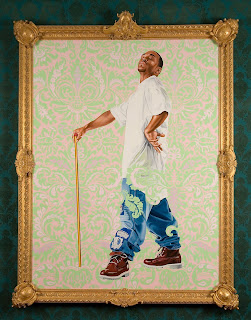 Kehinde Wiley: the painter who is doing for hip-hop culture what artists once did for the aristocracy

Thelma Golden
Born and raised in South Central Los Angeles, Kehinde Wiley was 11 years old when his mother enrolled him in free art classes at a local university. From that point on, Wiley continued to study and practice art, going on to receive his M.F.A. from Yale. Hip-hop and art history collide on Wiley's canvases, in which contemporary urban black men pose as angels, prophets, and saints against richly colored swirls of ornate baroque and rococo ornamentation. It's art that is both brainy and ballsy, earning nods of approval from fans of Tupac and Tiepolo alike, which explains why his work has landed in the collections of both Russell Simmons and the Brooklyn Museum. Here the 28-year-old artist speaks to Thelma Golden of the Studio Museum in Harlem, where as an artist-in-residence Wiley found inspiration for the works that have launched him into the art-world stratosphere.

THELMA GOLDEN: How are you, Kehinde?

TG: So, when did you know you were an artist? Did it happen right out of the womb? When did you first feel that you'd really made a work of art?

KW: It's tough to say. I feel like the process of becoming an artist in my own right took place sequentially. There was a point in high school that exemplified the beginnings of that when I was doing competitions with the NAACP's ACTSO program. I won bronze the first year. The second year I won silver, and then I finally finished off with gold.

TG: That makes you a real, official black artist. You have a gold medal in it! [both laugh]