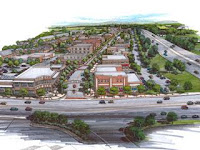 A recently released rendering of High Point's plans for the Washington Drive District features renovated historic buildings, streetscapes, a park and even a museum.
The drawing is one of the first glimpses the public has gotten of the Core City Plan, High Point's effort to revitalize the downtown and surrounding areas.Officials said the Washington Drive District is a high priority in the plan.
The proposed museum would honor the area's African-American heritage, including the legacy of High Point native and jazz legend John Coltrane.