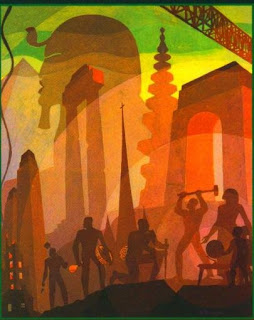 Smithsonian exhibit highlights African-American paintings
By Ursula Ehrhardt
Aaron Douglas (1899-1979) was an easel painter, muralist, illustrator, and art educator. Born in Topeka, Kansas, he moved to New York City in 1925 and settled in Harlem, then in its economic, social and cultural heyday as a black "Mecca."
Within months, Douglas became a key member of the New Negro Movement or "Harlem Renaissance." This was a broad-based African-American intellectual and cultural movement of the 1920s and 1930s that emphasized the importance of the literary, performing and visual arts in furthering a sense of black identity and pride, as well as promoting racial tolerance and understanding.
The exhibition, "Aaron Douglas: African American Modernist," at the Smithsonian American Art Museum through August 3, charts the course and breadth of Douglas' career. Featuring about 90 works, the show spans some 40 years, from 1917 to 1966. It includes paintings; preparatory studies and panels from several of his most important mural series; prints and drawings; plus illustrations and dust cover designs for books by prominent black writers, such as Alain Locke, Langston Hughes, James Weldon Johnson, Countee Cullen and many others.