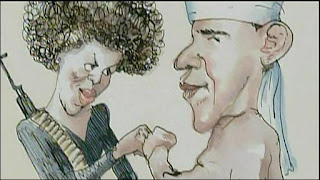 Sketchy Imagery
A survey of Obama in pencil, ink and paint shows artists are struggling to get the brother right.
TheRoot.com
Updated: 6:11 PM ET Jul 15, 2008

July 16, 2008--Depending on whom you ask, the July 21 cover of The New Yorker has become cause for outrage, confusion and partisan glee. Given the flare-ups surrounding race and representation that have rocked the 2008 presidential race, it's easy to treat the satirical cover—of a be-turbaned Barack and a be-afroed Michelle Obama—and other "racialist" images of the couple as a serious problem. But when it comes to cartooning, the presumptive Democratic nominee has gotten a bum rap since day one.

During Obama's meteoric rise from state senate to the threshold of the oval office, political cartoonists have had to grapple not just with a fresh face to draw, but a new race to signify. Photographs of Obama's angular, open visage—half white, half black—have graced countless magazine covers in the last year alone, appearing at times Marvel-esque, at others proletarian. His cartoon self, however, has been wildly incoherent.


http://jhmckissic.artistportfolio.net/
Posted by JHM at 1:04 PM