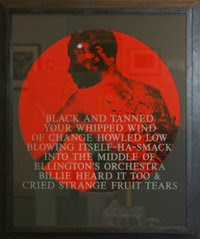 WEST PALM BEACH — These words seem cryptic unless you see the piece of artwork with which they are associated: a black frame with a large circular peephole over a photograph of a slave covered in whip marks, or brands, in his flesh. The print is possibly from the 1860s, and the colors over it make the message of blood and violence clear. It’s a view into the unimaginable horror that was slavery, but in postmodern work.

The print is only one of a multitude at the Norton Art Museum in West Palm Beach, which currently features two collections of African-American art.

Next to that exhibit, the museum features the Kinseys’ historical timeline of artifacts, highlighting Norton’s own African-American art collection.

The Shirley and Bernard Kinsey Collection is a reflection of the couple’s movement through life together.

Obama Art
from The Independent (UK)

A stencilled Obama portrait titled Hope will be auctioned today by Def Jam Recordings founder, Russel Simmons, at his annual celebrity-rich benefit for charity. Pre-bidding was more than $100,000 (£50,000) by yesterday afternoon. The art market has gone wild for Obama "street art". Limited -edition campaign posters that were sold for £15 now get snapped up for thousands on eBay. Obama himself is now wise to collectors shoving to the front of rope lines to get posters signed. Nobody, it seems, wants McCain art.

"He is the greatest African-American photographer of the modern era," she says.

The 35 pieces in the GRAM show clearly back up that remark as they "take viewers on a visual journey through periods of poverty and racism" of the 1940s as well as gang violence in Harlem, N.Y., civil rights protests in the nation's capital and general portraits of American life from 1941 to 1971. Langston Hughes, Ingrid Bergman, Malcolm X and Muhammad Ali are just a few of Parks' impressive portraits.

http://jhmckissic.artistportfolio.net/
Posted by JHM at 12:30 PM