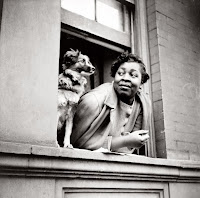 In the 1940s, a photographer named Gordon Parks broke into a scene that had previously been dominated by white men. He was the first black photographer to work for magazines like Life and Vogue, and the first to work for the Farm Security Administration and the Office of War Information. Born into poverty and the youngest of 15, he had a sensibility about poor living conditions. But as a renowned photographer, he also had access to some of the most famed athletes and celebrities, like Muhammad Ali and Ingrid Bergman.

This summer, it was announced that more that 4,000 prints and 20,000 negatives of Parks' work will be moved to Purchase College/State University of New York to be preserved, cataloged and made available for public view and study. The groundbreaking photographer died in 2006, and the Meserve-Kunhardt Foundation acquired his work the following year. The foundation will also be sending photos by Timothy O'Sullivan, Mathew Brady and Ed Clarke along with Parks' collection to be housed by Purchase.