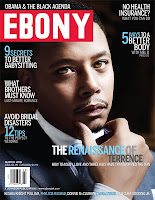 PORTSMOUTH — For the next two months, a new art exhibit at the Seacoast African American Cultural Center will bring visitors on a visual journey through six decades of African-American history, as chronicled by Ebony magazine.
Local artist Shawn Pelech and SAACC Vice President Kelvin Edwards spent three months collecting covers of the magazines from people throughout the country. Ebony is a monthly magazine for the African-American market that has been published continuously since 1945. Some of the covers were framed and are now part of the 40-image display — the first exhibit at the SAACC since it moved to the Discover Portsmouth Center at the city's former library.
"We borrowed and begged from all around and got them up," Pelech said. "It's the first show in the new space, and I think it looks pretty good."
The exhibit opened last weekend and will remain on display until early October. The covers feature African-Americans who made contributions in all realms of society over the past 60 years, from politics, the arts, religion, sports, science and education.
Pelech said it was a pleasure putting the exhibit together and she learned a lot by doing it. She said she also felt it was important to highlight the publication in a time when so much is material is read online.
"It's printed material, it's visual and we don't want to lose that printed word," she said. "As we were doing it, I was thinking of how magazines are becoming extinct and how special it is to be able to show this at this time."
SAACC President Vernis Jackson said the first exhibit in the new space is fitting because Ebony is the only African-American magazine to have chronicled the lives of African-Americans continuously during a period of enormous changes.
"When I saw the covers it just sort of jolted me back and I remembered all contributions these people have made," Jackson said. "I expect to see African-American culture and history to be displayed here and I think we've accomplished that goal."
Pelech said she'd like to share the exhibit with another cultural group in another city and perhaps bring a different outside exhibit to Portsmouth.
For More Information, Click Here.
Posted by JHM at 8:34 AM