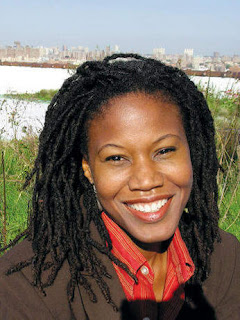 Activist and environmental leader, Majora Carter, will be the next speaker in the 2009 George
T. Hunter Lecture Series on September 15, 2009. Ms. Carter is a leader in the environmental
justice and green‐collar job movements. In 2006, Ms. Carter was the recipient of a MacArthur
genius grant for her work in bringing sustainable development and green‐collar jobs to her
South Bronx neighborhood. The George T. Hunter Lecture Series is sponsored by the Benwood
Foundation, in partnership with the University of Tennessee at Chattanooga, the Ochs Center
for Metropolitan Studies, and CreateHere.
Ms. Carter will replace Van Jones in the lineup of George T. Hunter Lecture Series speakers. Mr.
Jones was recently appointed by President Obama as Special Adviser on Green Jobs. “We regret
that Mr. Jones won’t be available for the September lecture, but we understand that his new
position in the Obama Administration will require his full and undivided attention,” said Corinne
Allen, Executive Director of the Benwood Foundation, “However, we couldn’t have found a
better replacement speaker than Majora Carter. Like Mr. Jones, Majora is a young leader in the
green collar job movement and can speak about the importance of creating healthy and
sustainable communities for all residents.”
Born, raised, and continuing to live in the South Bronx, Ms. Carter’s work takes her around the
world in pursuit of resources and ideas to improve the quality of life in environmentally
challenged communities. She founded Sustainable South Bronx in 2001 and since then, she has
been instrumental in creating riverfront parks, building green roofs, working to remove poorly
planned highways in favor of positive economic development, and successfully implementing
the Bronx Environmental Stewardship Training (BEST) program— a pioneering green‐collar job
training and placement system ‐‐ seeding a community with a skilled workforce that has both a
personal & economic stake in their urban environment. Ms. Carter worked with Van Jones to
co‐found Green For All, a national initiative dedicated to creating quality jobs in green
industries by collaborating with government, business, labor, and grassroots communities.
“Given the involvement in the green movement within the UTC community, we are proud to
have Ms. Carter, a dynamic environmental leader, participate in the lecture series,” said UTC
Chancellor Roger Brown. “We know she will be an engaging speaker for our students and
faculty, as well as the broader community.”
Ms. Carter will be the third speaker in the 2009 George T. Hunter Lecture Series. Prior speakers
were author and historian, Doris Kearns Goodwin, and PBS Education Correspondent, John
Merrow. The lecture will be at 7pm at the Roland Hayes Concert Hall located inside the UTC
Fine Arts Center. All lectures are free and open to the public. For more information, visit
www.benwood.org.
###
Posted by JHM at 9:35 AM