5 Black Homo-Hop Artists You Need to Know About

Though Last Offence has got the aggressive manner and hard beats you’ve come to expect from a hip-hopper like Jay-Z, he’s a million times hotter and gayer than Jigga. Alongside his blunt wise-cracks about pounding guys and making asses bleed, he also raps about the so-called Christians that killed men like Harvey Milk and Matthew Shepard. His albums are perfect for working out some good old-fashioned sexual aggression and even better, he’s giving them all away for free on his MySpace blog. They feature the talents Bry’Nt and Nano Reyes and other homohop artists that didn’t make our list. 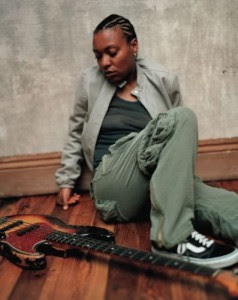 Meshell Ndegeocello
Origins: 1993 - Washington, DC
Albums: 8
Stand-Out Album: The Anthropological Mixtape (2002)
Hear This Now: “Leviticus:Faggot”
The first female artist signed to Madonna’s Maverick record label, German-born bisexual Meshell Ndegeocello (pronounced Mee-shell N-deh-gay-o-chel-o) predates Erykah Badu and Lauryn Hill by half a decade and has put out more than both women combined. Ndegeocello doesn’t call herself a hip-hop artist; to her, hip-hop’s a watered-down mainstream derivative that’s hardly countercultural anymore. So instead, she works a postmodern mix of jazz, funk, and rock that’s more Marvin Gaye than Missy Elliot; but don’t let that fool you. She’ll sing about fucking your boyfriend with all the swagger of a pimp then turn around and ponder the dual nature of desire in a gentle upper register.

Check out Queerty for the rest of the list.
Posted by JHM at 10:11 AM

Thanks for dropping these names..love Meshell but never heard of the first artist...now I do..thanks bro!