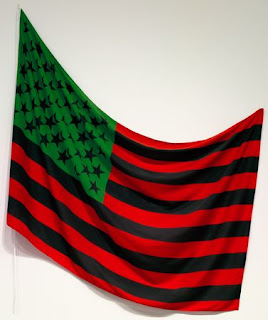 The American flag is more than a symbol this political season; it has become a necessary prop.

Each presidential speech comes in front of at least a dozen flags on poles; the more the better. Attention is paid to whether candidates are wearing their flag lapel pins (last debate: Barack Obama, yes; John McCain, no; Sarah Palin, a real glittery one).

At a McCain rally this week, country singer Lee Greenwood wore a flag jacket that would have been blacked out had it been worn by, say, Abbie Hoffman on a TV talk show in 1970.

Artist Sheila Pree Bright knew the volatility of the symbol when she asked a group of young people aged 18 to 25 to pose with it. Her subjects were from her hometown of Atlanta, as well as in colleges at Winston-Salem, N.C., Irvine, Calif., and in Hartford.