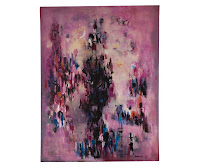 BOSTON, MA.- The Museum of Fine Arts, Boston (MFA), recently acquired three paintings by leading African-American artists of the 20th century at the African-American Fine Art Sale at Swann Auctions (NY): Untitled (about 1960–64) by Norman Lewis; The Juggler #1 (about 1964) by Hughie Lee-Smith; and 715 Washington Street (1947), by Walter Simon. The MFA purchased the Lewis for $312,000—the highest price ever realized at auction for an abstract work by an African American artist, and an auction record for any work by the artist. The Simon, which also set an auction record for the artist, was purchased with Museum funds raised by the MFA’s Heritage Fund for a Diverse Collection—an art acquisition fund established in 2005 for the purpose of diversifying the Museum’s collection of American art. “These recent purchases are in keeping with our commitment to deepen the MFA’s collection of 20th-century African-American art,” said Malcolm Rogers, Ann and Graham Gund Director of the Museum of Fine Arts, Boston. “We are particularly delighted to have acquired works by these three noteworthy artists, which will find a permanent home in the Museum’s new American Wing when it opens in late 2010.” Untitled by Norman Lewis (1909–1979), is an exceptionally fine example of the artist’s abstract style of the 1950s and 1960s. The expansive composition and masterful rendering of color in a range of vibrant and ethereal passages evoke Lewis’s sophisticated contribution to the Abstract Expressionist movement, which he experienced first hand in New York City. Clusters of small figures created by calligraphic strokes of paint convey the artist’s concern with broader issues of individuality and society. Unlike many of Lewis’s works that suffered neglect, this pristine canvas was formerly owned by the important modern art collectors, Judge Edward R. and Rae O Dudley. Among his many accomplishments, Judge Dudley was the United States Ambassador to Liberia, the first African-American to hold the title of ambassador, and later Justice of the New York State Supreme Court. His wife Rae was a painter and connoisseur, who knew the artists whose works she collected and championed their careers. This Lewis was never publicly exhibited until it appeared at Swann Galleries. Lewis’s work is represented in major museums including the Museum of Modern Art and the Smithsonian American Art Museum. The MFA, Boston has one early work by Lewis titled Harlem Jazz Jamboree (1943, Wein Collection), an energetic and expressionist painting that reflects a transition from Lewis’s earlier interest in Social Realism to his later abstractions incorporating multiple figures. Untitled represents the Museum’s only example of Lewis’s abstract work.

Read the Rest of the Story Here.
Posted by JHM at 8:37 AM