SMH: Birth of the Cool 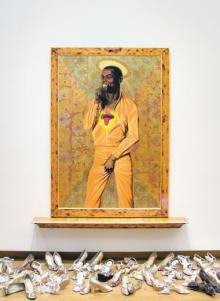 I’m not sure if Barack Obama’s election had anything to do with it, but upon entering “Birth of the Cool,” the Studio Museum’s survey of eminent African-American painter Barkley L. Hendricks, I found myself marveling incredulously at the art world’s myopic view of its own recent history, and thinking, not for the first time, that here was a long-overdue show. It’s almost embarrassing that this survey of Hendricks’s work is the first big retrospective for a figurative painter who has clearly influenced—and who in many cases outshines—so many of his peers. Political questions aside, Hendricks needs to be recognized as a pioneer, and “Birth of the Cool” is an important initial step in that direction.
Let’s begin at the beginning, with his first self-portrait, made after a trip to Europe when he was college-age. Hendricks, who was born in 1945 and grew up in Philadelphia, had observed that the halls of the museums he’d visited were lined almost exclusively with the faces of white men (and occasionally women). He returned determined to paint a world he did not see reflected there, which is to say his own community, and to bestow on that community the same art-historical importance. In effect, he was imagining something that did not yet exist, resolving to create it from scratch—which is, after all, the impulse that underlies the making of all art. But in Hendricks’s case, the challenge must have been especially daunting, because that one thing he could not see was a part of his own self.

Read the Rest of the Story Here.
Posted by JHM at 9:57 PM