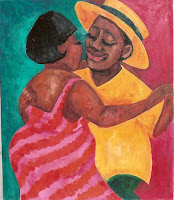 When Bonnye Brown (née Chamberlain) was a young girl, her older brothers and sisters chipped in to buy their mother a house in what Brown describes as a “Beaver Cleaver” neighborhood. But as Brown grew into a young woman, the neighborhood grew into something else.

“What I thought was the best neighborhood in the world became infested with drugs and drug dealers,” Brown said. “And we were angry.”

Brown decided to put her emotions into her art and painted “4:30 Appointment With the Mayor,” which portrays 10 neighbors sitting on folding chairs, waiting to have a word with the mayor.

Closer to allegory than irony, to social idealism than realism, “Appointment” depicts the hope of community empowerment and improvement. It’s something that Brown knows about, having channeled her artistic emotion not just onto canvas but also into the community.