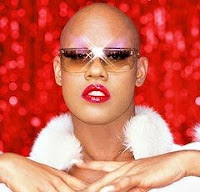 Just as psychedelia had its look and disco had its look, so did house party music, and through March, Aljira, A Center for Contemporary Art, is hosting a show just for that glittery, befeathered, identities-in-a-blender subculture.

Called "The B Sides," the exhibition features work by 28 artists and collectives, and it's strong on photography and video, as you might expect. But it also features a remarkable amount of painting, sculpture, and elements of installation art, since most house parties of the early '80's to mid-'90s naturally evolved into sprawling environments.

There appears to be a fine line between creating an artist's environment and decorating your gallery to convey a sense of what the house party scene was like -- after all, the scenery is only a small part of what you look at when you're dancing.