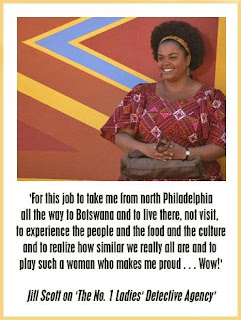 Those who know me know that The Number One Ladies Detective Agency is one of my favorite TV shows.
Podcast: Emmy hopeful Jill Scott on her cool African sleuth and the day her melting shoes stopped the show

Three-time Grammy champ Jill Scott may have something to sing about when Emmy nominations are unveiled July 16. As the critically hailed star of "The No. 1 Ladies' Detective Agency," she could be nommed for best TV drama actress and, if she wins, make Emmy history as the first African American to claim that category.
In our podcast chat, Scott shares her view of her role as an unflaggingly upbeat detective determined to right everyday woes in her African homeland: "She wants to heal Botswana's ills. She's a woman of substance. She's a lady. She doesn't curse. She isn't violent. I personally think she's got it going on! And I think it's inspiring for all of us. Everybody, all the people who aren't so cool. She proves an average person can actually make a difference."

In its review of "The No. 1 Ladies' Detective Agency," the L.A. Times hailed Scott's performance as "a revelation" while portraying "Precious, an earth mother in brightly colored batik, with her abiding belief in the basic goodness of life." The HBO series is so good, insisted The Times, that it is "clear that this show will restore the premium cable network to its former stature as the most surprising place on television." Such huzzahs mean that the program is a real contender for best drama series too.
Listen to our podcast chat to hear Scott reveal what it was like to work with baboons ("they smell terribly and I was about four and a half months pregnant — I had to shoot quick and run to the trash can") and the late, great director Anthony Minghella (Oscar champ, "The English Patient"), who championed the series and helmed its pilot before dying of a hemorrhage while battling cancer in early 2008.
"He was so generous with his energy," Scott recalls, and he was tough, but when things got really heated under the African sun, "he would sing" and everyone would join in crooning Motown songs. "He only got angry at me once," she confesses. Why? Listen to her tell the tale of the day "my shoes melted on my feet" and production had to halt.

Read the Rest of the Story Here.
Posted by JHM at 8:22 PM

I LOVE IF SHE WERE TO WIN! THAT SHOW IS JUST AWESOME!!!

Next to True Blood, this is the best show on TV right now. I can't wait for Season 2.