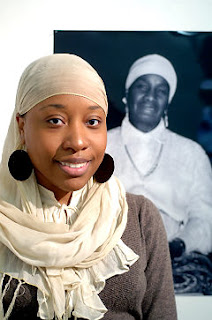 NEW YORK, NY June 05, 2009 —Islam is in the air – from Barack Obama’s big speech, to a festival in New York this month of Muslim arts and ideas. Among those voices are five young women artists who have a show at the Museum of Contemporary African Diaspora Art in Brooklyn. WNYC’s Siddhartha Mitter spoke with them.
REPORTER: The multimedia artist Nsenga Knight grew up Muslim in a black family in Brooklyn, and her video piece features voices from that community.
KNIGHT: It’s an oral history project that uses photography video and interviews to discuss the lives of African American women who converted to Islam prior to 1975.
REPORTER: The women speak of finding their way to Islam in the era of black nationalism. It’s one of the sometimes overlooked stories of local – American – Islam. By contrast, the work by Fariba Alam suggests far-away origins, shrouded with nostalgia. Alam is Bangladeshi-American. She imprints old family photos onto ceramic tiles. There’s a recurring image of a young girl. Alam says it’s a kind of response to the way Islam often obscures women’s bodies:
ALAM: I think very subconsciously I wanted to see in a lot of my works that female form where I didn’t grow up seeing it.
REPORTER: Alam says she’s an artist first, Muslim second, but that the two can’t be disentangled. You feel that same tension in the pieces by Mahwish Chishty, who comes from Pakistan. She says her installations are influenced by Islamic architecture -- but she also likes to use wood and metal, asserting her strength and autonomy. Still, she says, she doesn’t mind serving as a cultural ambassador.
CHISHTY: I feel like I have a responsibility if somebody’s asking me about Islam, I really want to tell people what I know.
Read the rest of the interview here.
Posted by JHM at 9:59 AM