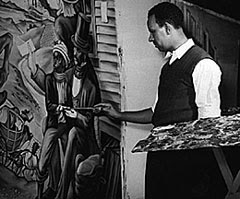 In 1963 Romare Bearden and fellow artist Hale Woodruff invited other artists to join a group. They later called themselves the Spiral group and meet at Bearden's downtown Canal Street studio to discuss political events related to the civil rights movement and the plight of blacks in America. Initially the group was concerned with logistical issues, such as obtaining busses to travel to the March on Washington in the summer of 1963. However, their efforts turned toward aesthetic concerns, rather than political. Spiral member Norman Lewis framed the question: "Is there a Negro Image?" To which group member Felrath Hines responded, "There is no Negro Image in the twentieth century—in the 1960s. There are only prevailing ideas that influence everyone all over the world, to which the Negro has been, and is, contributing. Each person paints out of the life he lives." Spiral sought to define how it could contribute to the civil rights movement and to what author Ralph Ellison called a "new visual order."

Woodruff suggested Spiral as a name for the group, alluding to the Archimedean Spiral, which moves outward and constantly upward. Spiral's First Group Showing was subtitled Works in Black and White. Bearden had suggested the exhibition's black-and-white theme because it comprised both socio-political and formal concerns.
For more information about Spiral, click here.
Posted by JHM at 10:12 AM