Being invisible may be every child’s fantasy, but for many men and women of color in America, it has been a grim reality.
For more than 30 years, contemporary Boston painter Robert Freeman has wrestled with this issue, the same one that fueled Ralph Ellison’s landmark novel about race relations in America, “The Invisible Man.” Freeman approaches his subjects from the perspective of the educated and affluent black middle class, a group often ignored by the media. But with the election of the nation’s first black president, Freeman’s work seems more relevant than ever.
“The Obamas are the face of a black middle class that has been around and flourished for a long, long time,” Freeman said from his studio on Moody Street in Waltham, “even if it has really been invisible. With the first family front and center, attention is focused on the universal values they reflect, that define what it is to be a man, what it is to be a family. For a young black child, a black president is an enormous thing. I don’t think we have felt the full effect of his election yet.
“I think there are far more ripples going out right now that are going to turn into big waves,” he continued. “A new face of America is being presented to Americans and to the rest of the world, and it has made everyone think quite differently about what we look like and who we are.”
Freeman, 64, hopes that his two young daughters will benefit not only from the political change that Obama promises, but from a change in the white world’s perception of African-Americans.
“We should always have been seen as a beautiful, cultured, elegant people,” said Freeman, who grew up in Washington, D.C., and moved to Boston in 1967 to attend the School of Fine Arts at Boston University. “But it seems that we are just being discovered.”
Freeman, who lives in Jamaica Plain, has noticed an uptick in interest surrounding his work. According to the artist, gallery sales of his work are up 33 percent over last year. 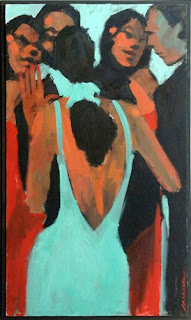 He hopes that other black artists will benefit, too. The Clark Gallery in Lincoln has represented Freeman for years, but the work of few contemporary black artists are exhibited in the Boston area on a regular basis.
Freeman began painting the black middle class in the early 1970s. He drew on childhood memories of his parents: college-educated professionals who stepped out in black tie and chic cocktail dresses - images that would inspire his “Black Tie” series. But, Freeman says, at first they were painted with “scorn, scorn, scorn.” He, like many children of the ’60s, rejected the values of his parents.
The paintings feature black socialites in striking graphic compositions. They are aloof, self-absorbed and seem to resent the viewer’s intrusion. Their pretense, arrogance and materialism testify to an absence of substance and soul.
Over the years, Freeman returned to the “Black Tie” series. Today, 25 years after that first painting, it includes roughly 100 pieces. His work still focuses on the same subject matter: African-Americans in formal attire at social events. Freeman came to realize that painting the black, middle-class world of his parents was a means of understanding them and their values, as well as his own role as a parent and his place in the world.