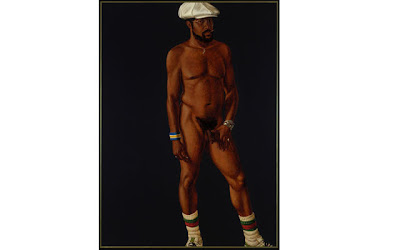 NEW YORK—In an era when black artists like Kara Walker, Glenn Ligon, and Barkley Hendricks command solo museum shows, top gallery representation, and healthy auction results, it's debatable whether a sale devoted exclusively to African-American art is necessary or even desirable.
But Nigel Freeman, director of Swann Galleries, which will hold its fifth such semiannual sale tomorrow, says it absolutely is, both for the opportunity to bring new artists to market and to achieve higher prices for those who are already established. This year's incarnation will feature works ranging from photographs from market newcomer Cornelius M. Battey, priced in the $1,000 to $3,000 range, to Hendricks’s painting Bid ’Em In/Slave (Angie), estimated at $60,000 to $90,000, and John Biggers’s lauded Shotguns (1987), expected to pull in a quarter of a million dollars.
Demand in the African-American market has been strong recently, says Freeman, with a marked increase in institutional interest. And it can't hurt tomorrow's sale that the art world is buzzing about the 40-some works that First Couple Barack and Michelle Obama have selected to install on the walls of the White House while they're living there, seven of which are by African-American artists (surely a better ratio than that at the average museum or gallery show).
Read the Rest of the Story Here.
Posted by JHM at 11:26 AM