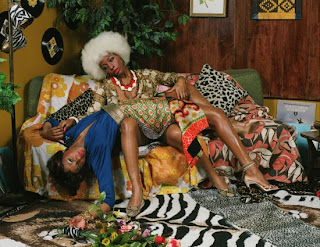 This summer I visited the Art Institute of Chicago and one of my favorite pieces in the new contemporary wing was a photograph by Mickalene Thomas. Check out this interview with her from NYArts.
Leah Oates: Every artist has a different path to becoming an artist. What was your path?
Mickalene Thomas: When I was in middle school I attended an after-school program at the Newark Museum in New Jersey. But during high school my interests naturally shifted and I became seriously into cross-country and track and field. It wasn’t until my mid-twenties, while living in Portland, Oregon, that I began to develop the desire to make art. I was a product of my environment, heavily influenced and inspired by my friends—mostly artists and musicians—like Patrick Abbey, a painter; Thomas Lauderdale, a musician and lead of Pink Martini; and Chris Stark, a photographer. In 1994, the Portland State University hosted a solo exhibition of Carrie Mae Weems’s work and I was blown away. It was the first work I had seen by an African-American woman artist and I visited the show again at least ten times. Although so much talent surrounded me, I didn’t truly pursue art until after I spent a weekend at an art therapy retreat. Shortly thereafter, I made several works on paper and later applied to Pratt Institute and San Francisco Art Institute with the encouragement of my friend, Chris. I ended up attending Pratt for my undergraduate studies and later went to Yale for my MFA.
LO: How do you conceptualize your images and what is your working process?
MT: Believe it or not, some of my best ideas come to me in my dreams. It’s wild, in my dreams the concepts are so tangible that when I wake up I have to make it real. Other times, my work comes from the desire to dissect and understand my own journey. Sometimes it’s as simple as holding the mirror up to my face and looking deep into myself every day. There’s what you see in the mirror and what you project when you’re out in the world. I’m trying to connect the two in my work. When I decide on an idea or new body of work, I begin to research ways of executing my idea literally and theoretically. A lot of what I do formally in my work is driven by the idea of artifice, of what’s real and not real, and how we perceive the difference. Once it’s narrowed down to a particular time or space, I build up the installation in my studio and then I open it up to auditioning women. Thus, the work begins. From the session with the models, I choose several photographs to recompose as collages, from which I base my paintings.
Read the Rest of the Interview here.
Posted by JHM at 7:41 AM