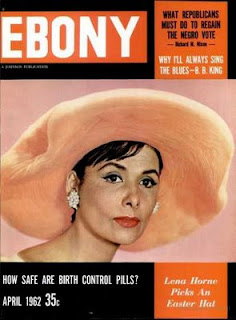 From phillynews.com
Mina Dia-Stevens recalls looking around the auditorium of an Ebony Fashion Fair show as a young adult and knowing that there were other African American fashionistas out there, from a cluster of giddy sorority college girls to a group of churchgoing women.
"They are exposing African Americans to world-renowned designers that they may not have known otherwise," said Dia-Stevens, who is an adjunct professor at Moore College of Art and Design and an associate professor at the Art Institute of Philadelphia.
And it's coming to an end, at least for now.
After more than 50 years of showcasing the highest caliber of fashion in the industry to mostly African American audiences, organizers of the traveling international fashion show have canceled its fall 2009 installment.
The Philadelphia Cultural Committee Inc., the nonprofit organization that has hosted the program annually in Philadelphia or New Jersey for 50 years, is among 180 organizations that will not put on a show this fall.
"The overall economic climate has presented challenges for many, including our potential corporate sponsors," said Linda Johnson Rice, the chairman and chief executive officer of Johnson Publishing Co., in a statement.
The firm, which publishes Ebony and Jet magazines, hopes to bring back a retooled show starting in fall 2010.
"In the coming months, we will develop a new business model to ensure that the show is a mutually beneficial endeavor," said Rice.
As a nonprofit endeavor, the Ebony Fashion Fair show has raised more than $55 million to benefit largely African American groups nationwide, according to Jeanine Collins, a spokeswoman for Johnson Publishing.
The Philadelphia Cultural Committee uses part of its $15,000 to $20,000 in proceeds to give scholarships to college-bound high school students who are interested in the arts.
Each year it gives $1,000 to five or six students who are pursuing higher education in New Jersey, Philadelphia, or Delaware. The remaining money goes to local charities.
"If we do not have the Ebony Fashion Fair show, it's going to be a deterrent to giving scholarships," said Gwendolyn A. Faison, president of the Philadelphia Cultural Committee.
Faison said the committee is meeting to discuss alternative fund-raising.
Over 4,000 shows have been performed to date in the United States, the Caribbean, and London, according to a representative from the publishing company.
The featured clothing includes cutting-edge couture fresh off the runways of Fashion Week as well as ready-to-wear "extravagant" pieces, said Cheryl Washington, a fashion designer and an adjunct professor at Moore College of Art and Design.
"It is a multitude of talent from all over the world," she said.
The show has exhibited the work of several notable African American designers, including Stephen Burrows, James Daugherty, L'Amour, B. Michael, and Quinton de' Alexander.
It was started in 1956 to support the Women's Auxiliary of Flint-Goodrich Hospital in New Orleans by John Johnson, then publisher and CEO of Johnson Publishing.
But Dia-Stevens says the show is more than just a few models strutting the latest fashions on the runway.
"When you see the show, it's like a performance - it's ambience, it's atmosphere," she said. "It is more theatrical than it is anything."
Thinking of her 14-year-old daughter, Dia-Stevens hopes to keep her family's appreciation for fashion alive.
"It is a special event that I would definitely want to experience with my daughter," she said.
Contact staff writer Naomi Nix
at 215-854-2797 or nnix@phillynews.com.
Posted by JHM at 11:32 AM

Wow, this is news to me. Ebony Fashion Fair in an Institution that must continue. I thinks it's important that they really think out of the box while retooling the show for next year....think more globally....all people of color.