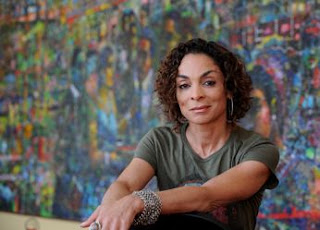 “For Colored Girls Who Have Considered Suicide When the Rainbow is Enuf,” was built from 20 poems by writer Ntozake Shange in the 1970s and became one of those stage shows that wins awards and shows up on college reading lists.
This play, and Shange’s other work, shows up every few years on Atlanta stages, too. This time a True Colors Theatre production of “For Colored Girls…” runs in preview tonight, and opens tomorrow at the Southwest Arts Center. It stars Robin Givens and Nicole Ari Parker was directed by Atlanta native Jasmine Guy.
She grew up in Atlanta as the child of a preacher, graduated from the Northside School of the Arts (now North Atlanta High School) and went on to an acting career before returning last year. She told reporter Howard Pousner she’s re-learning the city in new ways, and I wonder if her influence here could help redefine the centers of stage work here.
Consider her observations about growing up on the southwest side of Atlanta, and where it fits into arts and culture now. From the story:
“This is the side of town I grew up on, and I grew up always going to the other side of town for ballet lessons, going downtown to perform. … And this area is a theater-going area; these would be the same people who hop up to New York for a weekend and see five Broadway shows.
“I want to serve them but also to make this another hub like the Alliance [Theatre] or 14th Street Playhouse or Horizon [Theatre], just one of the spots where [Atlanta theater-goers] would go. It’s on the map now.”
Want to go? “For Colored Girls Who Have Considered Suicide When the Rainbow Is Enuf” has a preview performance at 8 p.m. Tuesday. Runs July 15 through Aug. 9. (A post-show talk back with Guy was added on July 19, too.) $20-$40. Southwest Arts Center, 915 New Hope Road. 404-588-0234, http://truecolorstheatre.org/
For instant updates about fun things to do around Atlanta, follow Jamie on Twitter @insideaccess.
Posted by JHM at 6:22 AM

Wow I wish I could see the play. It is one of my favorites.