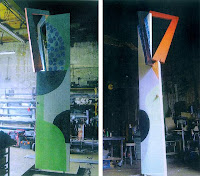 Christine MacDonald / The Detroit News
Detroit --City Council members turned art critics Wednesday, deeming three donated pieces too abstract for the city's $13.5 million Paradise Valley Cultural and Entertainment District.
A three-person council committee halted -- at least temporarily -- the city's Downtown Development Authority from installing the works, including a piece by Tyree Guyton, a Detroit artist renowned for transforming a city block into a collage of polka dots, stuffed animals and found art.
"We wanted art reflective of Paradise Valley, not reflective of some artist's vision of the universe as it exists in their mind," said Councilwoman Barbara-Rose Collins.
The works were commissioned using Kresge Foundation grants through the Sherry Washington Gallery in Detroit. The three pieces Collins and Councilman Kwame Kenyatta questioned included a ladder of twisted metal and what appears to be a large colorful door by Guyton.
Collins said she was stumped on a third work.
"Do you know what this is?" Collins asked reporters.
Guyton's spokeswoman declined comment, while The News couldn't reach the other artists, Todd Erickson and Alice Smith.
The rebuff came after a quasi-government group, the Detroit Economic Growth Corp., asked the council to accept and install the works that officials say council staffers have known about.
Read the Rest of the Story Here.
http://www.tyreeguyton.com/
Posted by JHM at 9:21 AM

I'm curious now to see what they accepted.

I love how they said that modern, Picasso type stuff is not what they were going for. Of course that's their option, but I have to wonder if they looked at his work before they commissioned him!