LOS ANGELES, CA, Aug 15, 2008 (MARKET WIRE via COMTEX) -- Percy Miller (formerly Master P) announces the launch of Better Black Television (BBTV) a family friendly network that will provide positive content for a black and brown culture that will appeal to all races with a goal to bring people of color a choice when turning on their television.

The content on the channel will contain a wide arrangement from health and fitness, animation, financial planning, reality TV, sitcoms, dramas, movies, responsible hip-hop music and videos, politics, sports and entertainment news, educational children's shows as well as teen and family programming. Production has begun and will be based out of California, New York, Louisiana and Florida. In addition, BBTV is in the process of purchasing local cable channel affiliates across the country.
Read the rest of the story here.
Dixon Museum and African American Folk Art 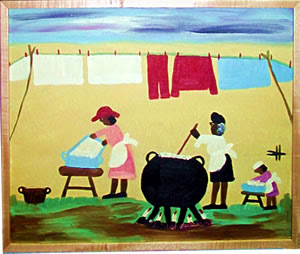 MEMPHIS.- The Dixon is proud to host Ancestry and Innovation: African-American Art from the American Folk Art Museum. Featuring the inspired creations of visionary African-American folk artists, the show is drawn entirely from the impressive holdings of the American Folk Art Museum in New York. Since 1961, this institution has been one of the nation's leading resources for the preservation, study, collection, and enjoyment of America's great folk art traditions.
Among the exceptional works in the show are nine full-sized quilts, folk art's most appealing and accessible form. The vivid Diamond Strip Quilt pieced and sewn by Lucinda Toomer (1888-1983) at her Macon, Georgia, home when she was eighty-seven years old was the first quilt to enter the permanent collection of the American Folk Art Museum. It is now one of the icons of twentieth-century outsider art. Ancestry and Innovation: African-American Art from the American Folk Art Museum also features the famous Pig Pen Quilt by Pecolia Warner (1901-1983), an artist whose remarkable design sensibility has clear affinities with African textiles she had ever seen.
The popular Clementine Hunter (1886-1988), and expressionist painter of simple southern traditions, who lived nearly all of her more than one hundred years on the Melrose Plantation in Natchitoches, Louisiana, is well represented. As is David Butler (1898-1997) and his delightful sculptural forms, which he improvised form painted tin, wood, and wire in his home in Patterson, Louisiana.
Possibly the most extraordinary objects in the show are the huge painted constructions by Thorton Dial, Sr. (born 1928) and his son, Thorton Dial, Jr. (born 1953), of Bessemer, Alabama. The senior Dial's The Man Rode Past His Barn to Another New Day and the younger Dial's only slightly smaller King of Africa aptly demonstrate folk art's capacity for heroic scale and subject matter.
Read the rest of the story here.
Posted by JHM at 4:54 PM