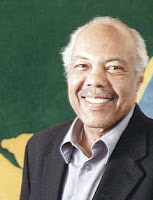 NEW YORK—Pioneering African-American architect J. Max Bond Jr. died on February 18 of cancer, the New York Times reports. He was 73. Bond was known for making his way in a white-dominated field and for being an educator and a socially conscious architect. In his early career, he worked in France with André Wogenscky, in New York at Gruzen & Partners and Pedersen & Tilney, and in Ghana, for the government from 1964 to 1967. He returned to New York to lead the Architects Renewal Committee of Harlem before founding the firm Bond Ryder & Associates in 1970, which 20 years later merged with another firm to become David Brody Bond Aedas. Among his most notable projects were the Martin Luther king Jr. Center for Nonviolent Social Change in Atlanta, the Birmingham Civil Rights Institute in Alabama, and the Audubon Biomedical Science and Technology Park for Columbia University. He served on the New York City Planning Commission in the '80s, and taught at City College and Columbia. At the time of his death, he was the partner in charge of the museum portion of the National September 11 Memorial and Museum at the World Trade Center.

Read the Rest of the Story Here.
Posted by JHM at 9:28 AM