A Display of Black Power 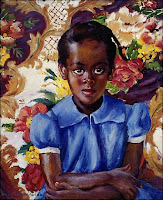 That's what it looks like anyway, at Hemphill Fine Arts, where "Selections From the Barnett-Aden Collection: A Homecoming Celebration" is on view. The art on the walls -- by Jacob Lawrence, Romare Bearden, John N. Robinson, Aaron Douglas, Alma Thomas, Henry O. Tanner, Elizabeth Catlett, John Biggers and others -- makes for a virtual who's who of 20th-century black art. None of it is for sale. Yet this contemporary commercial gallery setting really does feel like a homecoming.
That's because, despite the museum-caliber work on view, the show has its roots in another commercial Washington gallery. Albeit one that many have never heard of.
Founded in 1943 in a private home in Northeast Washington, the now-defunct Barnett-Aden Gallery was a collaboration between the late James Herring, a Howard University professor of art, and the late Alonzo Aden, a student of Herring's and curator of the school's art gallery. It was named after Naomi Barnett-Aden, Alonzo's mother and the owner of the house at 127 Randolph St. At a time of widespread segregation, the gallery gave a home to African American artists, many of whom could not exhibit elsewhere.

Link to the Original Story Here.
Posted by JHM at 7:40 AM

Thanks for the heads up. I will check it out in DC.