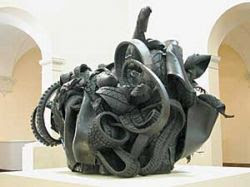 On the face of it, “Provocative Visions: Race and Identity” at the Metropolitan Museum of Art is a modest and not exceptionally illuminating exhibition. But time spent with this display of works by seven contemporary African-American artists brings to light an intriguing dichotomy between the visual and the verbal.

On the one hand, Chakaia Booker, Willie Cole and Alison Saar all favor a kind of postmodernist faux-primitivism by which they try to connect to ancestral roots. On the other hand, Glenn Ligon and Lorna Simpson produce works of language-based Conceptualism in which the absence of visual imagery becomes a metaphor for social invisibility. And bridging the gap between the mythic-image makers and the Conceptualists, Kara Walker and Whitfield Lovell relate to themes of both primitivism and visibility.

Read the rest of the story here.
Posted by JHM at 4:46 PM