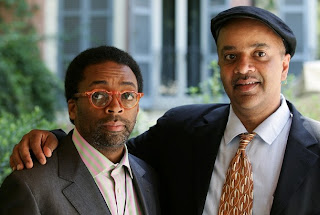 The San Diego Film Festival and the rest of this week's movie listings
By Anders Wright
The Sixth Annual San Diego Film Festival kicks off on Thursday, Sept. 25, with The Lucky Ones, the new Iraq-war film from Neil Burger. The movie, which opens nationally a day later and stars Tim Robbins, Michael Pena and Rachel McAdams, is actually a road-trip flick, as all three play returning injured soldiers thrown together in a minivan due to circumstances beyond their control. I thought it was pretty thin, but it humanizes the soldiers in a nice way. Michael Pena, a charismatic actor, has clearly become the go-to guy for films involving 9/11 and the wars that followed. He was buried in the Twin Towers in World Trade Center, got killed in Afghanistan in Lions for Lambs and takes a piece of shrapnel in the opening moments of The Lucky Ones.