What do you Think? 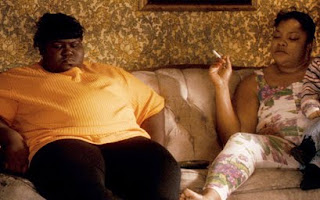 Can the black family catch a break in the movies?

www.startribune.com That's what many African-Americans in the Twin Cities and elsewhere are asking in the wake of two recent films: the critically acclaimed "Precious" and "The Blind Side," a No. 1 box-office hit that has grossed nearly $130 million since its Nov. 20 release.

• In "Precious," based on Sapphire's wrenching novel "Push," an obese, illiterate black teenager is pregnant again by her father while her also-abusive welfare-recipient mother scorns her for stealing her man.

• In "The Blind Side," which stars Sandra Bullock, an illiterate, homeless black teen is taken in by a kind white family. Under their care, he blossoms into a football star.

"I'm not saying that these things don't happen and that they are not good movies," said Brenda Anderson, 59, a law firm manager in Minneapolis. "It's just that at a time when the Obamas are in the White House, it seems like there's nothing [on screen] to reflect our proud reality. Instead, we have stories that show the black family as a total failure."

Read the rest of the story here.
Posted by JHM at 5:35 AM

We've had this sick realism trend for a while. Show the world the worst picture of black people only make it a poignant drama so that it strikes the audience's core. Other words, they get the picture we are all like this. "Oh, it's such a good story."

There is also the black boy makes good in a white society theme and we are all supposed to be encouraged and warmed in heart.

OK, black people are a social and family life disaster and will become normal if our white mentors capable of extreme God like compassion are able to guide us on how to grow into a civilized black version of themselves, yet......Where the heck is Captain Cisco when you need him?

Wealthy, highly educated and renowned black family, takes in struggling mistreated white children from the US and Europe to rescue them from an uncertain end. They are mocked and ridiculed in the courts and newspapers and by blacks everywhere. No, inside the walled compound, the kids are taught to wear hoodies and sneakers, dance wildly and talk slurred with rhythm, belts are banished, pants bagged so that you can't tell if they have a butt or not. Girls assume the position on command, no I'm talking about the cell phone position and the favorite phrase is "what ever!" And thugs learn to shoot guns sideways to show they didn't have proper training from white instructors.